Plastic surgeons rely on different anesthetic techniques to help ease their patients’ anxieties and nerves before and during operations.

Some minor procedures, such as a facelift, only require a numbing medication such as a lidocaine injection and can be performed in the surgeon’s office, similar to a dental procedure.

But for more major surgeries, such as breast enhancement procedures, tummy tucks, and rhinoplasty, stronger anesthesia is required.

Continue reading to learn more about general anesthesia, twilight sedation and why we prefer it at Emmett Plastic Surgery.

What is the Difference Between Twilight IV Sedation Vs General Anesthesia?

Each one of these anesthesia types has its own applications and uses depending on the type of surgical procedure.

For instance, most plastic surgeons will choose to place their patients under general anesthesia for operating room procedures for more in-depth surgeries such as breast augmentation, breast lifts, and breast reductions.

General anesthesia is an intravenous medication that places patients into an unconscious, pain-free state so they cannot remember anything. However, general anesthesia essentially temporarily paralyzes a patient, so a breathing tube must be inserted to assist with breathing.

With twilight IV sedation, patients are also given medication intravenously, however, this drug is a hypnotic that doesn’t cause full body paralysis like general anesthesia. Instead, they remain totally unconscious and go into a relaxed, trance-like state where they cannot form new memories.

Because sedation doesn’t numb anything, it must be paired with a lidocaine injection to numb the incision site. With it, the patient can breathe on their own without a tube.

For smaller operations, like facelifts, an operating room isn’t necessary and the procedure can be performed in the surgeon’s office using a numbing agent such as a lidocaine injection, similar to what dentists use to numb a patient’s gums and for other dental procedures.

At Emmett Plastic Surgery, we believe twilight IV sedation is a safer and better option and use this method for all of our major surgeries, including breast augmentation, breast reduction, breast lifts, and tummy tucks.

We do not use general anesthesia in our office at all.

A few reasons why twilight IV sedation is preferred include:

Are You Completely Awake with IV Sedation During an Awake Breast Augmentation?

At Emmett Plastic Surgery, because we use twilight sedation during our breast implant surgeries, this counts as an “awake breast augmentation” procedure.

The term “awake” itself is a misnomer. The patient is totally unconscious, while the patient’s brainstem is awake enough to breathe on its own. This is why we prefer IV sedation over general anesthesia because the patient can still breathe on their own without a breathing tube.

This sedation is specifically created to eliminate anxiety and place patients into a completely relaxed and unconscious state where they cannot form new memories.

When the procedure is over, you’ll have no recollection at all of what happened, and can recover quickly, without the nasty hangover feeling for days.

Twilight sedation helps patients stay relaxed and puts them into an unconscious state.

It’s designed to calm the nerves of patients. This medication also creates temporary amnesia in the patient so they won’t remember their surgery at all.

While twilight anesthesia can reduce physical feelings, it must be paired with a local numbing agent such as lidocaine to reduce pain from incisions. When sedation and lidocaine injections are used today, they create a great alternative to other intravenous medications.

Anecdotally, many patients who reported extreme anxiety prior to surgery felt that melt away as soon as they were sedated.

Once your procedure has finished, it can take about an hour for the effects of the sedation to wear off after your surgery, much quicker than general anesthesia.

Another benefit of twilight anesthesia is that it won’t cause nausea or vomiting post-operation, unlike general anesthesia, which is the last thing you’d want if you just underwent a tummy tuck or received breast implants.

Have you been considering breast augmentation or another plastic surgery procedure?

Contact us today to schedule your initial consultation with Dr. Emmett. 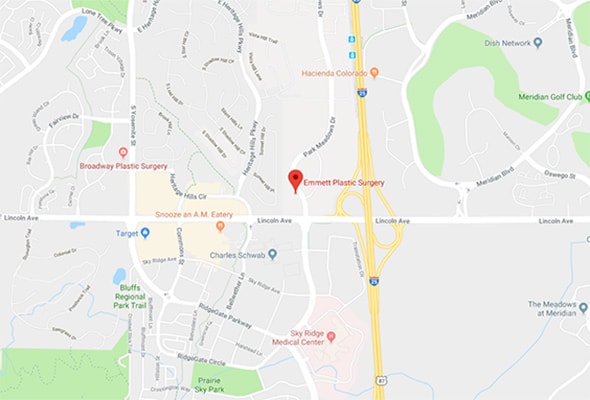